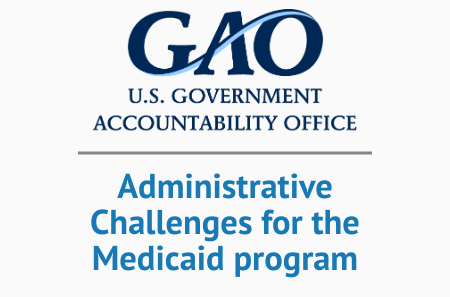 Posted at 11:25h in Medicaid by Eliott Konsin
Share

Medicaid has been designated as a high-risk government program by the GAO since 2003. The Medicaid program has struggled over the past seventeen years due to poor fiscal oversight and other administrative issues. These challenges will be exasperated as the program expands and enrollment surges during the COVID-19 pandemic. If Medicaid is expected to deliver on its goal to serve the health and wellness needs of our nation’s most vulnerable low-income individuals and families, it is critical that these administrative challenges be addressed.

In a recent report from the GAO, the agency assessed federal Medicaid policies, state perspectives on challenges they encounter due to current policies, and what federal actions might be taken to resolve these issues. After interviewing Medicaid administrative officials from 50 states and Washington D.C., the GAO was able to identify federal policies, laws, and regulations that caused difficulty to effectively administer the Medicaid program.

Four problematic areas cited by officials include coverage exclusions and care coordination, covered benefits and eligibility, Medicare and Medicaid alignment, and payment methods. In addition, officials brought up reporting requirements and the lack of guidance. There is also much consternation due to the long delays when states are seeking approval to waive certain statutory Medicaid requirements. CMS is currently in the process of addressing these problematic areas and has released updated guidance, streamlined the waiver process, and is working with stakeholders to develop an updated reporting system.

In addition, the GAO also identified five related considerations that broadly apply to the reported areas of concern. The considerations include targeting federal oversight to critical areas, leveraging program data, balancing oversight and flexibility for waivers and demonstrations, clarifying CMS policy, and responding to change.

The GAO determined that program oversight activities must support beneficiary access to benefits and the proper use of federal expenditures to protect against improper payments. This consideration was based on the GAO’s March report that estimated improper payments in the Medicaid program increased $21 billion in FY 2019. HHS reported that the increase was a result of insufficient documentation for eligibility determinations. Additionally, many improper payments resulted from noncompliance in screening and enrollment requirements.

Poor quality data has been another issue for Medicaid plans in recent years. Incomplete and outdated data make program oversight extremely difficult. The report stated that “accurate and complete data on key measures – such as measures for beneficiary access and use of services and the costs of providing such services – are critical for oversight, including ensuring proper payments, and for informing any evaluation of policies.” Reliable quality data could help demonstrate the cost-effectiveness of expanding Medicaid coverage to other services. States and stakeholders agree that quality data will greatly aid in administering the program.

Medicaid has been on the GAO’s High-Risk List since 2003 as a result of poor oversight and other administrative issues. Over the last seventeen years, program officials have struggled to administer Medicaid due to laws, policies, and regulations. If the program is to become fiscally solvent while effectively coordinating care, improving fiscal oversight and accessing quality data is critical.