Syrtis Solutions developed ProTPL, a real-time point of sale cost avoidance service for the payer of last resort market. ProTPL offers the most active and current primary pharmacy coverage information from any vendor in the market. Up to 4 times more coverage information! ..and in real-time, at the point of sale. The service will integrate seamlessly with your existing TPL processes and, best of all, once implemented, your plan will begin cost avoiding immediately. ProTPL will prevent losses due to missed claims and filing deadlines antiquated recovery programs can’t avoid.

In 2006, the United States Government Accountability Office (GAO) issued a report to the Centers for Medicare and Medicaid Services (CMS) on the challenges encountered by states in implementing Medicaid third-party liability (TPL) requirements.

In order to address the problems outlined in the GAO report, CMS issued guidance to states in a 2008 Budget Brief that requires states to uphold the cost avoidance standard for pharmacy claims and eliminate waivers that permit pay and chase methodologies.

Based on this guidance, states have responded by developing coordination of benefits (COB) programs that rely on self-reported recipient eligibility data and/or on stagnant data collected by TPL vendors for pay and chase purposes. This data is incomplete, latent and not sufficient for true cost avoidance. In order to successfully meet CMS’ cost avoidance guidelines, an effective point of sale solution that accesses a real-time national database of health care coverage would be required to cost avoid claims and eliminate the problems attempting to collect monies for claims that states should have not paid in the first place.

In 2008, in support of disaster relief efforts, CMS turned to Syrtis Solutions to deploy a real-time pharmacy cost avoidance solution at the point of service (POS) following hurricanes Ike and Gustav. CMS needed a solution that would prospectively cost-avoid pharmacy claims for those patients with other health coverage. The solution accessed Surescripts’ Master Patient Index (MPI), which houses over 230 million lives, to prospectively identify patients with other health coverage at the point of sale.

The Emergency Prescription Assistance Program (EPAP) was a success, cost avoiding 15% of all claims in sub-second transaction times with zero timeout issues and, most importantly, without requiring workflow changes at pharmacies. 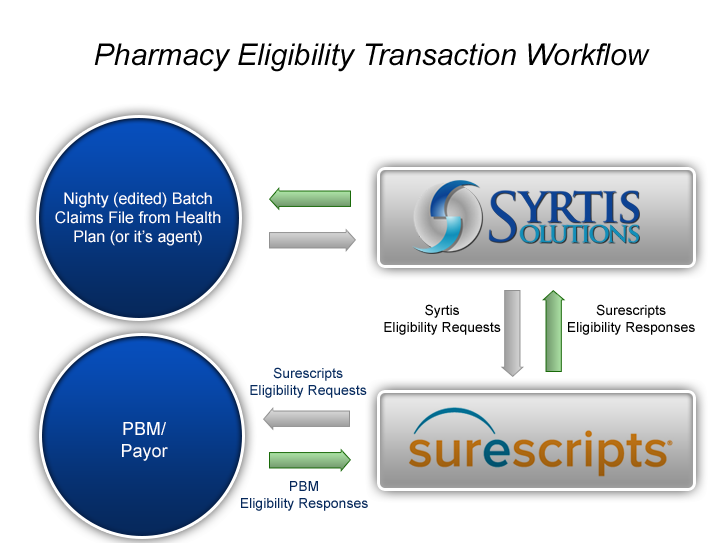 The cost avoidance solution, ProTPL, used standard industry transactions; had low program administration costs; was quickly and easily implemented; fit the existing workflow practices of pharmacy providers; and, cost avoided pharmacy claims in real-time at the point of sale solving the issues not resolved by current “pay and chase” and TPL methodologies and vendors.

Subsequent to the success experienced in the EPAP program, further testing of several states’ Medicaid pharmacy claims data demonstrated that between 1% and 3% of the claims had other coverage in the MPI. Claims that were tested had already been paid, and thus had been previously subjected to each tested states’ current TPL and COB processes. As such, the results uncovered that there was additional coverage not previously known. As important, the results confirmed the GAO report’s conclusion that current processes are inefficient.