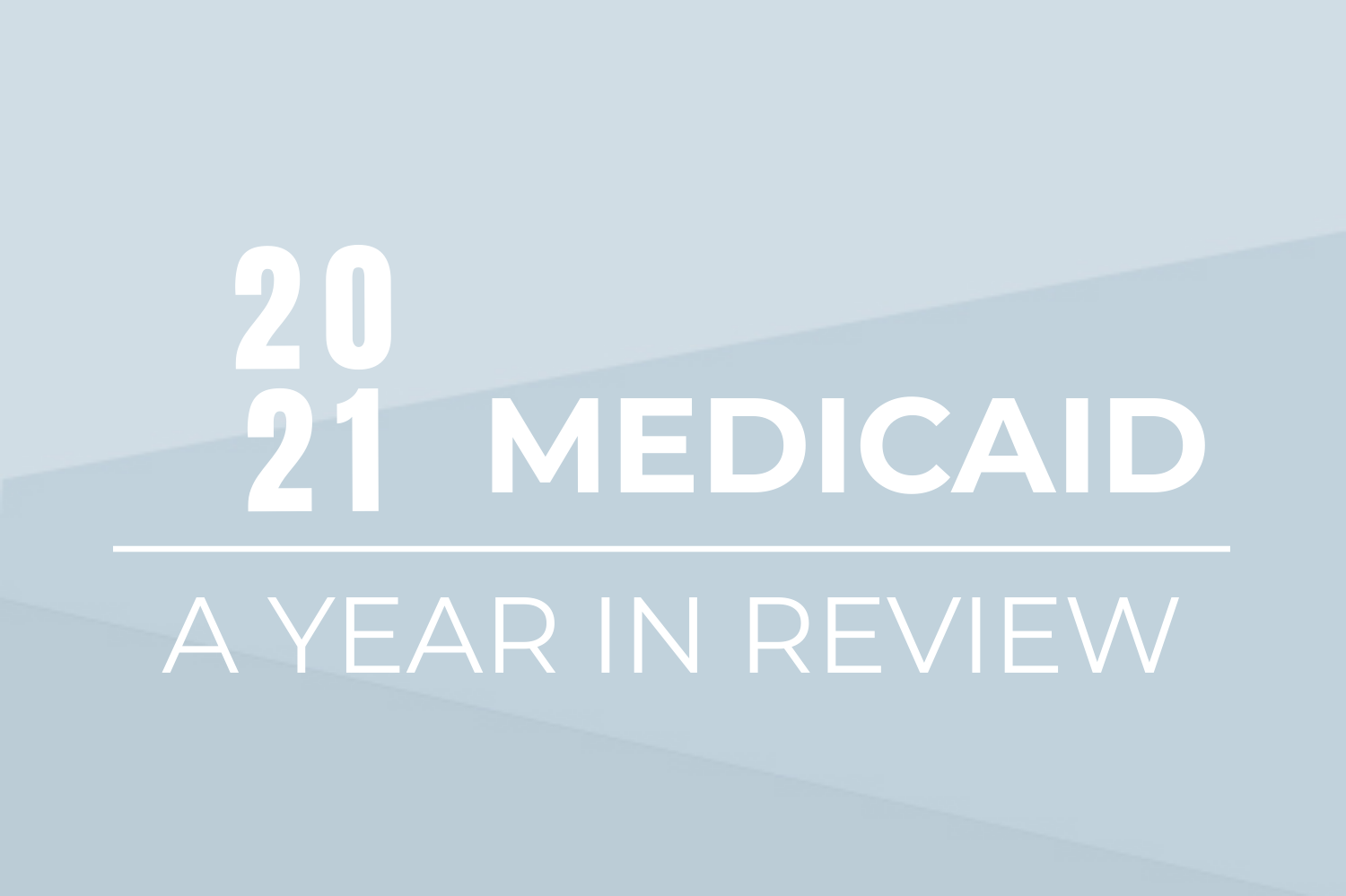 $98.72 BILLION IN MEDICAID IMPROPER PAYMENTS
Syrtis Solutions, November 29
Medicaid has been designated a high-risk program by the Government Accountability Office (GAO) since 2003 because of improper payments, poor quality data, and oversight challenges. Earlier this month the Department of Health and Human Services (DHHS) released its Agency Financial Report. In FY 2021 Medicaid’s estimated improper payments amounted to a staggering $98.72 billion. According to DHHS, the vast majority of these improper payments were a result of insufficient documentation and eligibility errors.  read more

States Respond to COVID-19 Challenges but Also Take Advantage of New Opportunities to Address Long-Standing Issues: Results from a 50-State Medicaid Budget Survey for State Fiscal Years 2021 and 2022  KFF, October 27
The coronavirus pandemic has generated both a public health crisis and an economic crisis, with major implications for Medicaid—a countercyclical program—and its beneficiaries. The pandemic has profoundly affected Medicaid program spending, enrollment, and policy, challenging state Medicaid agencies, providers, and enrollees in a variety of ways.1 As states continue to respond to pandemic challenges, they are also pushing forward non-emergency initiatives as well as preparing for the unwinding of the public health emergency (PHE) and the return to a new normal of operations.  read more

Medicaid Enrollment & Spending Growth: FY 2021 & 2022
KFF, October 27
In March 2020, the COVID-19 pandemic generated both a public health crisis and an economic crisis, with major implications for Medicaid – a countercyclical program – and its beneficiaries. During economic downturns, more people enroll in Medicaid, increasing program spending at the same time state tax revenues may be falling. While state revenues have substantially rebounded after dropping precipitously at the onset of the pandemic, the public health crisis has continued as a new surge of COVID-19 infections, hospitalizations, and deaths, fueled by the Delta variant, began to take hold in the U.S. in late July and August 2021.  read more

MEDICAID TPL SOLUTION PRESENTS SIGNIFICANT SAVINGS OPPORTUNITY Syrtis Solutions, September 28
Dependence on the Medicaid program has increased exponentially over time. Currently, it is the single largest insurer in the United States, and in FY 2019, it accounted for more than half of all federal funds distributed to states. Unfortunately, as the safety net program has grown, waste has also become more prevalent. Improper payments are costing the program billions of dollars every year. Despite being on the GAO’s High Risk List since 2003, Medicaid’s improper payment rate continues to surge and put more strain on budgets.  read more

Study: 15M people could lose Medicaid coverage after COVID-19 emergency ends Fierce Healthcare, September 16
An estimated 15 million people could lose Medicaid insurance coverage after the COVID-19 public health emergency ends, according to a new study that sounds the alarm for states and the federal government to ensure enrollees have continuous coverage. The Urban Institute’s study, released Wednesday and conducted on behalf of the Robert Wood Johnson Foundation, explores what would happen if key requirements to keep Medicaid recipients enrolled go away after the PHE, which is expected to run through the rest of this year. States will need to take action to ensure that affected residents know of other options for coverage.  read more

MEDICAID CAN SAVE MILLIONS WITH E-PRESCRIBING
Syrtis Solutions, June 30
Medicaid payers of last resort face the challenging task of recovering claims payments made in error when program beneficiaries fail to report primary coverage information at the time services are provided. Plan members do not share other coverage information for a multitude of reasons, but usually, they are not aware that they have other coverage. Without technology at the point of sale to prospectively identify other health insurance (OHI), payers of last resort cannot help but make claims payments in error.
read more

Costs and Savings under Federal Policy Approaches to Address Medicaid Prescription Drug Spending
KFF, June 22
Several recent policy proposals address the cost of prescription drugs to both consumers and payers. Though attention in current federal actions is largely focused on Medicare and private insurance drug prices, federal legislation also has been recently introduced or enacted that would affect Medicaid prescription drug policy. Most recently, the American Rescue Plan included a provision that would eliminate the Medicaid rebate cap and save $14.5 billion between 2021-2030.
read more

Three reversals point to major changes in federal Medicaid policy  State of Reform, May 20
The Biden administration’s reversals of three Trump-era Medicaid decisions signal a wholesale change in direction is now underway. While some legal wrangling is likely (and may be protracted), the previous administration’s imprint on the program is certain to fade with time. The new president signed an executive order on January 28th jump-starting an aggressive review of recent Medicaid decisions.  read more

Protecting Program Integrity in a Pandemic World: Challenges and Opportunities
Fierce Healthcare, March 15
Medicaid, the federal and state program that provides health coverage to low-income and elderly adults, children, pregnant women and people with disabilities, is countercyclical by nature. During an economic downturn, reliance on the safety net rises, driving increased spending at times when state and federal budgets are stretched thin. We saw this over a decade ago when the 2007–2009 financial crisis drove more than 10 million additional people to enroll in Medicaid, according to the Center on Budget and Policy Priorities.  read more

Medicaid and CHIP Eligibility and Enrollment Policies as of January 2021: Findings from a 50-State Survey
KFF, March 8
During the coronavirus pandemic, Medicaid has played a key role in providing coverage to millions of people who have lost their jobs or their health coverage. In addition, provisions included in the Families First Coronavirus Response Act (FFCRA) and the Coronavirus Aid, Relief and Economic Security (CARES) Act require states to maintain eligibility standards and provide continuous enrollment in Medicaid until the end of the public health emergency (PHE) in order to qualify for enhanced federal Medicaid funding.  read more

2020 Medicaid Managed Care Rule Summary
C&M Health Law, February 16
On November 13, 2020, the Centers for Medicare & Medicaid Services (“CMS”) published a final rule, demonstrating long-awaited efforts to streamline the regulatory framework governing the Medicaid and Children’s Health Insurance Program (“CHIP”) managed care programs. According to CMS, the purpose of the final rule is to relax certain administrative burdens imposed by the Medicaid managed care rule promulgated by the Obama Administration in 2016. The 2016 rule (the “Mega Reg”), reflecting efforts to modernize the Medicaid and CHIP managed care programs and frustrate widespread fraud and abuse, was the first update to Medicaid managed care regulations in more than a decade.   read more

4 Medicaid Eligibility, Enrollment Processes States Must Address
Health Payer Intelligence, January 26
Six months after the public health emergency ends, states will need to have completed certain Medicaid eligibility and enrollment processes, CMS has indicated. They must prepare in advance in order to meet these expectations, a Kaiser Family Foundation issue brief explained. As the coronavirus vaccines start to roll out and the end of the public health emergency seems to be in sight, state Medicaid programs must consider how they will return to normal policies. During the coronavirus pandemic, CMS established waivers meant to streamline administrative processes while states were addressing urgent coronavirus-related demands.  read more

CMS won’t add new Medicaid accountability rule
Becker’s Hospital CFO Report, January 15
CMS has officially withdrawn its proposed Medicaid fiscal accountability rule. CMS proposed the rule in November 2018. It aimed to promote transparency and fiscal integrity by establishing new reporting requirements for state supplemental payments to Medicaid providers. But last August, some hospital associations called on CMS to withdraw the rule, arguing that it could exacerbate the challenges U.S. hospitals. The hospital associations, including America’s Essential Hospitals and the American Health Care Association, argued that finalizing the rule would introduce “unprecedented restrictions on states’ ability to fund their share of the Medicaid program” at a time when hospitals are facing challenges and an uncertain future due to the COVID-19 pandemic.
read more

CMS Finalizes Changes to Medicaid Prescription Drug Rebate Program
JDSupra, January 5
Earlier this year, my colleague Ross Margulies and I told you about a new proposed rule issued by CMS that makes several changes to the Medicaid prescription drug rebate program, or the MDRP.  Recently, CMS finalized the rule and we thought we’d take this opportunity to tell you about it.  On balance, we think that the rule succeeds in CMS’s stated goals of increasing access to innovative health care therapies to Medicaid beneficiaries as well as clarifying some longstanding questions about the operation of the MDRP. But before we begin, a little bit of background about the MDRP.  read more